About Those Rumors of a Chinese “Coup”

I would love to see massive turmoil within the Chinese Communist Party as much as any America First patriot. However, let's stick with the truth and stop spreading rumors of a coup that didn't happen.

Editor’s Commentary: We covered this story yesterday when it first started popping up on other news aggregators and conservative outlets. As some noted in the comments, I “debunked” the story based on two weak arguments. First, I noted how weak the “evidence” was that there was some quiet coup. Second, I posted how one of the initial disseminators of the rumor that Xi Jinping had been ousted via military coup, Gordon Chang, had acknowledged that despite some strangeness happening in China, it seemed unlikely that a coup was taking place.

By my reckoning, that was enough to determine that it was a almost certainly a fake news story based on speculation and very, VERY limited reporting of any facts on the ground. Nevertheless, some commented that they wanted more than rumors and speculation in order to debunk a story that was based on… rumors and speculation. So, I waited until someone in Beijing to do the debunking for me in person, and here it is. Granted, even though the information is coming from the city itself where the so-called coup is taking place, there will be those who will note that business-as-usual happening in China is not necessarily evidence that a coup has not taken place. Alas, I have no counter-argument to that. Those who want to believe it happened will find reasons to continue to believe it happened until Xi Jinping is back in front of the nation as President of China. Even then, I’m sure some will say it’s all a front to cover up the truth.

I am just as anxious as any America First patriot would would love to see turmoil in Chinese Communist Party leadership. However, I don’t inject “hopium” into my reporting. All indicators point to the very likely case that something big and likely ominous is happening in China right now, but it’s not a coup. With that said, here’s the article by Tyler Durden over at Zero Hedge…

The Chinese rumor mill has gotten out of control over the last 48 hours. For those who have not heard the rumors, Xi has been supposedly removed in a coup ahead of October’s Party Congress.

#PLA military vehicles heading to #Beijing on Sep 22. Starting from Huanlai County near Beijing & ending in Zhangjiakou City, Hebei Province, entire procession as long as 80 KM. Meanwhile, rumor has it that #XiJinping was under arrest after #CCP seniors removed him as head of PLA pic.twitter.com/hODcknQMhE

By Sept. 24, Xi Jinping had become one of the top trending topics on Twitter. His name appeared on hashtags more than 42,000 times and the term “China coup” circulated 9,300 rounds on the platform, according to The Epoch Times.

“New rumour to be checked out: Is Xi jingping [sic] under house arrest in Beijing?” wrote Subramanian Swamy, a former Indian cabinet minister and parliamentary member until April.

Such speculation also came as Chinese nationals noted alleged mass flight cancellations across the country. Nearly 10,000 flights were supposedly called off on Saturday, the same day a key conference on national defense and military reform was convened in Beijing.

Meanwhile, Xi, who arrived back in China’s capital on Sept. 16 after meeting with Russia’s Vladimir Putin at a regional summit in Central Asia, didn’t appear at the Beijing meeting but relayed instructions that the armed forces should focus on preparing for war. Similarly missing was Wei Fenghe, his handpicked Chinese military general currently serving as the country’s national defense minister.

So those are the rumors, if mostly without any substantiating evidence. Meanwhile, here are some actual facts from the ground in Beijing, courtesy of Der Spiegel correspondent Georg Fahrion…

Today in Beijing, I investigated the #chinacoup so you don’t have to. At considerable personal risk, I ventured out to some neuralgic key points in the city. Disturbing finds. Brace yourselves. /1

Today in Beijing, I investigated the #chinacoup so you don’t have to. At considerable personal risk, I ventured out to some neuralgic key points in the city. Disturbing finds. Brace yourselves. /1 pic.twitter.com/z4CJYpQbbk

This is Xinhua Gate, the main entrance to the Zhongnanhai compound, where the entire central leadership resides and works, including Xi Jinping. Elite paratroopers have wrested control over the gate, cunningly disguised as the five middle-aged dudes who always stand there. /2

Nearby Tian’anmen Square swarms with thugs in plainclothes. I’ve been in China long enough to know these are not tourists. /3

Nearby Tian’anmen Square swarms with thugs in plainclothes. I’ve been in China long enough to know these are not tourists. /3 pic.twitter.com/xTwglk4v8i

Rebels in army fatigues guard the headquarters of the State Grid, controlling electricity supply in the capital. /4

The Second Ring Road close to the Foreign Ministry. One of Beijing’s main thoroughfares, it has been closed off to civilian traffic. A column of military vehicles stretches about 80 kilometers from here to some place in Hebei. /5

The Biden economy has decimated wealth and retirement accounts and things will continue to get worse until at least after the 2024 election. It behooves patriots to acquire physical gold and silver or make the move to self-directed precious metals IRAs from America-First companies that do not donate to Democrats. Go to Our Gold Guy for the personal buying experience with Ira Bershatsky. Go to Genesis Gold Group to work with a Christian fellowship-driven precious metals company. Or go to GoldCo for peace of mind from a bigger company.

The Second Ring Road close to the Foreign Ministry.

One of Beijing’s main thoroughfares, it has been closed off to civilian traffic. A column of military vehicles stretches about 80 kilometers from here to some place in Hebei. /5 pic.twitter.com/eCIjUIalNS

In front of the Central Station, holdouts from army units loyal to Xi have dug themselves in, guarding that crucial railway hub from their positions fortified with sandbags. /6

The Second Ring Road close to the Foreign Ministry.

One of Beijing’s main thoroughfares, it has been closed off to civilian traffic. A column of military vehicles stretches about 80 kilometers from here to some place in Hebei. /5 pic.twitter.com/eCIjUIalNS

China analyst Gordon Chang affirmed that a coup is unlikely, pointing to the lack of supporting evidence on the ground.

“I don’t think there was a coup,” he told The Epoch Times. “Because if there were a coup, we would see, for instance, a lot of military vehicles in the center of Beijing. There have been no reports of that. Also, there probably would be a declaration of martial law that has not occurred.”

“So it seems that something is happening, but we don’t know exactly what,” he said, adding that the only thing that can dispel some of the speculations is if Xi comes out to speak in public.

Zhang Tianliang, a writer and author of the Chinese language book “China’s Path to Peaceful Transition,” similarly dismissed the house arrest theory as not conforming to common sense.

During the past week, six senior Chinese officials, including two former cabinet-level officials, were handed heavy sentences for corruption-related offenses, adding to a string of officials purged in Xi’s anti-graft campaign he launched after taking office in late 2012.

How would Xi have the capacity to punish them if he has lost his grip on power, Zhang argued in his show on Sept. 22.

My sponsors are all hand-picked by me. I only recommend companies who believe in America First and who don’t bow to the woke crowd. That’s why MyPillow was our first sponsor. Use promo code “JDR” at checkout, please.

Finally, here is some additional color from Bill Bishop of Sinocism.

It’s CPC elite politics so never say never but I think this round of rumors is BS.

The rumor was originally hyped by an account with a track record of making bogus claims, and in the frenzied amplification no one has presented any credible sourcing or evidence, just lots of wishful thinking.

Today Xinhua announced the full delegate list for the 20th Party Congress and the statement about the selection, also read out on the Sunday CCTV Evening News, opens with the line “Under the strong leadership of the Party Central Committee with Comrade Xi Jinping as the core”

Shockingly, most precious metals companies who sponsor “conservative” news outlets are donating to Democrats and/or working with proxies of the CCP. We have found three companies that do not. You can find all three on our precious metals page.

And Xi of course is one of the delegates: 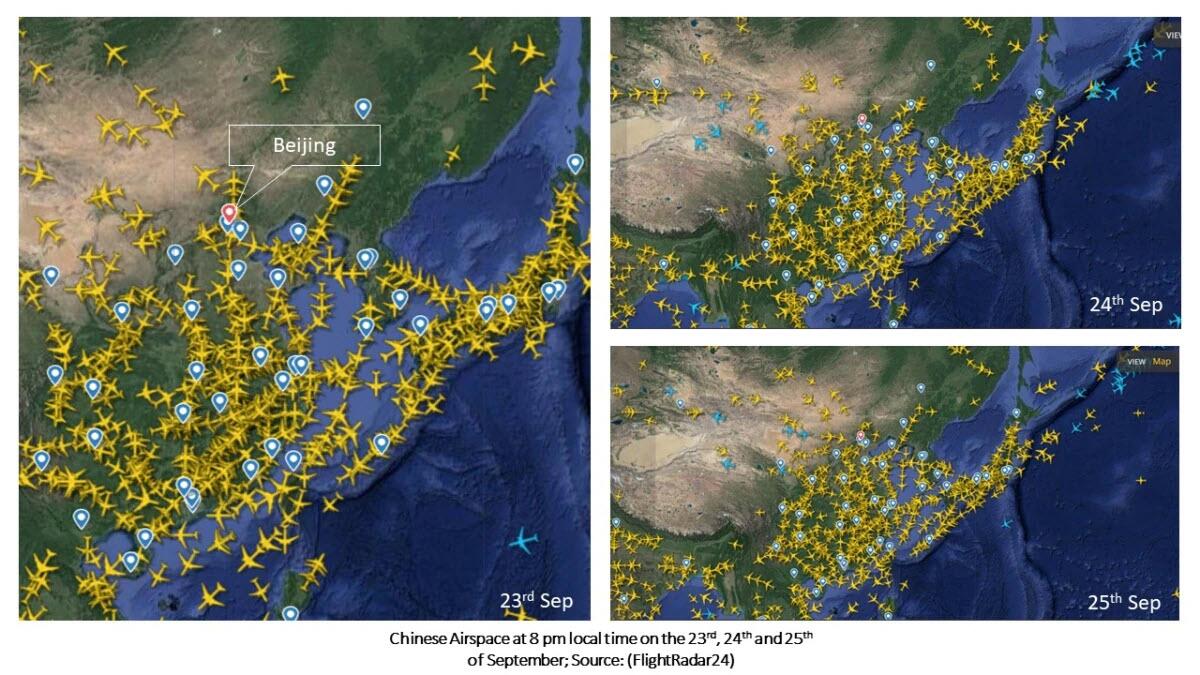 We may not see Xi for a while and so his “disappearance” may continue to fuel this and perhaps other rumors.

Whether or not Xi makes a public appearance, though, holds little significance, said Wang He, a U.S.-based commentator on China’s current affairs, noting that such an extended absence from public attention hasn’t been unique for Xi. To Wang, Xi’s overseas trip ahead of the Party congress was a projection of confidence.

“Without absolute assurance, this man will not take risks easily,” he said of Xi.

Article originally published on my Substack.

When preparing for societal collapse, don’t forget the water!

Bob Iger Was Brought Back to PROLONG Disney’s Groomer Agenda, Not Reverse It

Watch: Woman Has Epic Meltdown Over a Man's Microaggression of Telling Her... She Cut in Line