Pfizer’s court-ordered compliance with a FOIA request has resulted in tons of damaging data being dropped every month. Their Covid-19 “vaccine” research, development, and implementation were pocked with warning signs that the drugs were neither safe nor effective.

But the most recent release may be the most damning of all as it not only reveals the drugs are unsafe, but that Pfizer tried to cover it up by manipulating the numbers. It’s so blatant that it’s highly unlikely it was just an error.

Life News reported their study included 270 pregnant women. The first 34 had outcomes reported, but the numbers were so hideous that they did not follow the remaining 236 test subjects. Considering they were on the verge of the greatest pharmaceutical windfall in history, Pfizer decided it was better to run away from a problem rather than reveal it further. 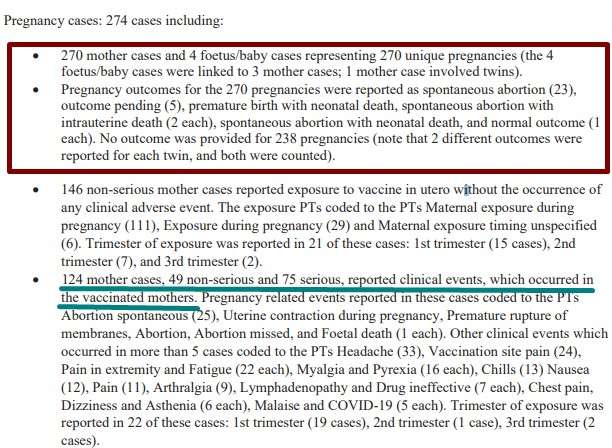 We will never know the outcome of the last 236 pregnancies, but we know based on Pfizer’s reluctantly released data that AT LEAST 82% of pregnant women injected with their jabs with reported outcomes during trials had miscarriages.

According to Life News:

Public Health and Medical Professionals for Transparency (PHMPT) requested documents related to vaccine licensing via a Freedom of Information Act Request, then sued the Food and Drug Administration (FDA). In early January 2022, a federal judge ordered the FDA incrementally release the documents it claimed would take decades to process. PHMPT has posted Pfizer’s confidential documents as they have become available.

In the most recent release, on May 2, 2022, a document titled ‘reissue_5.3.6 postmarketing experience.pdf’ disclosed on page 12 that by February 8, 2021, 270 women had received the mRNA injection during pregnancy. But 238 cases were apparently not followed (“no outcome provided”). And, therefore, the pregnancy outcomes for those women are unknown.

Why were the vast majority of cases not followed? The most likely scenario seems to be to coverup the inherent dangers in the mRNA jabs. With data curtailed, they could claim that there were 28 “known” miscarriages out of 270 pregnancies. At 10.4%, that’s  perfectly within the range of 10%-15% average in the United States. In other words, once they recorded an “acceptable” number of miscarriages, they simply stopped counting.

There’s a scene in Napoleon Dynamite when Kip, played by Aaron Ruell, is trying to demonstrate that the food storage containers he was selling were strong. He ran over one with his van, but when the container shattered, he exclaimed “dang it” and drove off.

Some may think it’s callous to bring up a scene in a comedy before describing the shocking results of the Covid jab study recently released by Pfizer, but “Kip’s” response to his food container failure seems to be very much like how Pfizer reacted to their failed jab results. After realizing their drugs were likely causing an unfathomable amount of miscarriages, they stopped counting and drove away in shame.

The mere fact that 88% of the pregnant women injected were not followed throughout their pregnancies is deeply concerning since 124 of the 270 pregnant women had some type of adverse reaction (49 nonserious, 75 serious) according to page 12 of the same document.

The Biden economy has decimated wealth and retirement accounts and things will continue to get worse until at least after the 2024 election. It behooves patriots to acquire physical gold and silver or make the move to self-directed precious metals IRAs from America-First companies that do not donate to Democrats. Go to Our Gold Guy for the personal buying experience with Ira Bershatsky. Go to Genesis Gold Group to work with a Christian fellowship-driven precious metals company. Or go to GoldCo for peace of mind from a bigger company.

Among those 34 pregnancies that are known, the report indicates that 28 babies died either in utero or upon birth. Only one outcome was reported as normal, and the remaining five were reported as “pending.”

In analyzing Pfizer’s own data, it is clear that 82% – 97% of the documented pregnancy outcomes resulted in death. (The 15-point variation is dependent on the final outcome of those in the “outcome pending” category.)

“This report confirms information we released last year,” said Operation Rescue president Troy Newman. “We look forward to seeing some kind of accountability put in place for those responsible for hiding this crucial data from the public.”

As more data trickles out from the initial studies, it’s becoming clearer why Pfizer fought so hard to keep their results hidden. Their “vaccines” are killing people, and they’ve known this from the beginning.

Image by Ulrike Mai from Pixabay.

Amazing Sculpture Shows the Beaty of Mother and Unborn Child